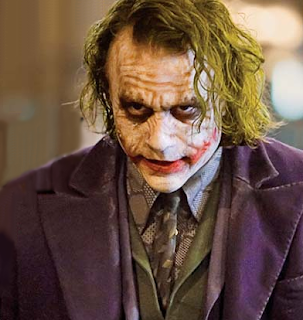 Another time, another day, that's how I procrastinated in posting anything here. It's the school holiday now and I finally have the time to do not-so-teacherly stuff like sleeping in late on a weekday ( well, thank God we've got the Friday free from going back to the campus), stuffing myself silly with chocolates ( makes you feel Happy and a bit less serious) and finally, finally to watch the most highly- anticipated movie of this year, Batman : The Dark Knight ( for those who have not watched it, the penalty for you is to be to be either gagged or bound to the cinema and plunked on the seat, because it is simply too amazing to be missed).

However, this break is no real break for us because we had to spend a lot of time to run the walk-a-hunt activity in the campus. I did not pull a lot of weight in my Hunt committee and this confirms my affirmation that in group work, it is always bound to have a few member who put in extra work than others and it happens to be me who is the lackadaisical one this time. Nevertheless, I do wish that we could glean some experience from organizing this thing to help us in our future undertakings, be it in school, NGO or any other field. One thing for sure, I can't wait to participate in a treasure hunt myself in another time, another place, so there you go again...

In The Dark Knight, the Joker keeps taunting about why do we have to be so serious all the time and I think this could or could not apply to us who are undergoing the teaching practice. As I have said, teaching is a roller-coaster of a ride and it is only us who can pull ourselves up again and learn from our mistakes at the same time. I think it is not the case of looking at the glass as half-empty or half-full since we have to get more serious as the observations passed by because by hook or by crook, we can only improve and not deteriorate as the days go by in teaching practice. Unfortunately, sometimes I feel like my zeal and enthusiasm to be a creative teacher could never match that of the first two weeks.

My second observation came and gone on the last day of school before the school holidays. This time, I had more kids in the class and the atmosphere was more livelier, if not cheekier. It was with 4C and you know I have always yakked about searching for ways to engage the bunch of boys there. Therefore, this time I did something that I thought might interest them because there are many of them who play Frisbee in the class. It was a writing lesson and they have to write a persuasive speech on "Why Playing Frisbee is Good for Students'. I told them that I thought Frisbee was some kind like the name of some breakfast cereals and got them to explain the rules of the game to me. The plan kinda work because clearly it's not a boring subject to them but I think I have staked my lesson too high in the materials that I used to teach them the techniques of writing a persuasive speech. I know that at their Form Four level, a persuasive speech is just like any other factual essay that they might write but I have always believed in employing the authentic materials to make students see how learning is relevant to their lives. Thus I gave them the paraphrased version of Brutus' speech after Caesar's murder in Julius Caesar to highlight the rhetorical questions, parallels and contrasts used in order to make a speech more persuasive. Then, I distributed an example of a simplified version of a speech by Obama to show them that 500 years on, the same skills are still being used to make a more convincing speech. Well, this may all sound very well on the paper but in practice, many of them did not get the idea and apply what I have told them when they were writing their own speech on the Frisbee topic. For one, 4C is a mixed ability class and maybe the materials have been a tad too difficult to understand. Besides, they are just 16-year-olds after all and maybe those concepts are not within their grasp. Mistake : not using materials that are appropriate to the proficiency of the majority of the class.

However the problem with me is that I usually think like how the good students think. I don't know I am doing this to unconsciously appease my own ego or what but the whole situation is a dilemma because I feel defeated when the good students get bored and I feel even more terrible when the weaker students could not follow the lesson because I have failed them as a teacher because they are the ones who should get the most attentionin the first place. Instead of teaching them anything, I murk the water by further confusing them instead. Mistake : It's not about creating a win-win situation or whatever it's called, but on catering to the needs of all students

On the brighter side, I am getting it on with 4A. Since we had covered all the texts in the literature component, I gave them some other texts to read so that they can appreciate and understand the literary texts in the component better. Besides, we talked about how did the poets' personal life relate to the themes in the poems as literature mirrors life. Furthermore, since Sonnet 18 tops the list of their favourite poems, I let them read another sonnet by Shakespeare, Sonnet 130, My Mistress' Eyes Are Nothing Like the Sun, which contrasts the whole idea of eternal beauty perpetrated in Sonnet 18.

It was a very humourous poem to read and I tried to keep a straight face while reminding the boys to control their hormones when they asked me to explain the line 'why then her breasts are dun' ( they were not pulling my leg, they truly did not get the meaning here, it was not very politically correct to favour fair skin anyway and the boys think that Shakespeare is a pervert). Besides, I asked them to write me a piece on which of the two sonnets that they prefer and a girl raised a very interesting question when she said that if beauty is in the eye of the beholder , why then Shakespeare complained about his lover's flaws? I just quipped that love is blind, but Shakespeare was just half-blind when he wrote Sonnet 130. Now I just wonder whether I would let 4C read this because even the girls there don't like Sonnet 14 and I don't want to blush in front of the very cheeky boys there.

Now it's two more days to go before going back to school for the last three weeks. I kinda missed my kids on Monday but now teaching i.e. waking up dead early, going to class, wearing skirts everyday, talking to people 7 years younger than me...are completely out of my system for the time being. Who says I am going to miss teaching?

Yes, procrastination is the thief of time. Better watch out so you won’t fall victim to the evil time thief. I understand how you feel about being lackadaisical. I mean if the leader is uninspiring and lackadaisical, how effective can you be? Yup, I’m the “leader” and I dropped the ball…

As for your “mistakes”, I don’t see them as mistakes at all. I believe that you have to stretch the students and you’re doing a fine job at that. No point giving them all the freebies that they can answer easily in class.

Gonna play devil’s advocate for a lil while here so I’ll just get this out in the open. I think you missed wide right when you said that classroom warfare is not about creating a win – win situation. One of the teachers you highlighted in an earlier post – Louanne Johnson says that teaching is about shifting the dynamics of the classroom so that it is no longer teacher vs. student but rather it becomes teachers and students vs. the curriculum. Isn’t that creating a win-win situation?

Unbelievable! You are growing in your thinking and perception. Your reflection on your teaching and the students' level and needs were spot on! You pointed out precisely what went wrong and worked from there to improve. Linking those to what you've learned was also proof that you're developing well as a thinking teacher. I thought that those were wonderful. Do think about what Johnny said as well. He has a point there about the 'win-won situation'.

i agree with what Sifu had commented, Soon Chen. You are much like a thinker. From what u've explained to me abt ur lesson, i always learn that there are certain degree of difficulty and challenges embedded :p i think ur students definitely learn a lot from u unconsciously and indirectly, especially 4A. i always like your lesson but students with a lower profi level like 4C if i ald knew that certain tasks are beyond the students' comprehension then i wouldn't try it. instead, i won't carry out "hard-to-digest" tasks or give articles which are full of vocabs or carry a lot of figurative meanings coz these will demotivate the students. What do you all think?